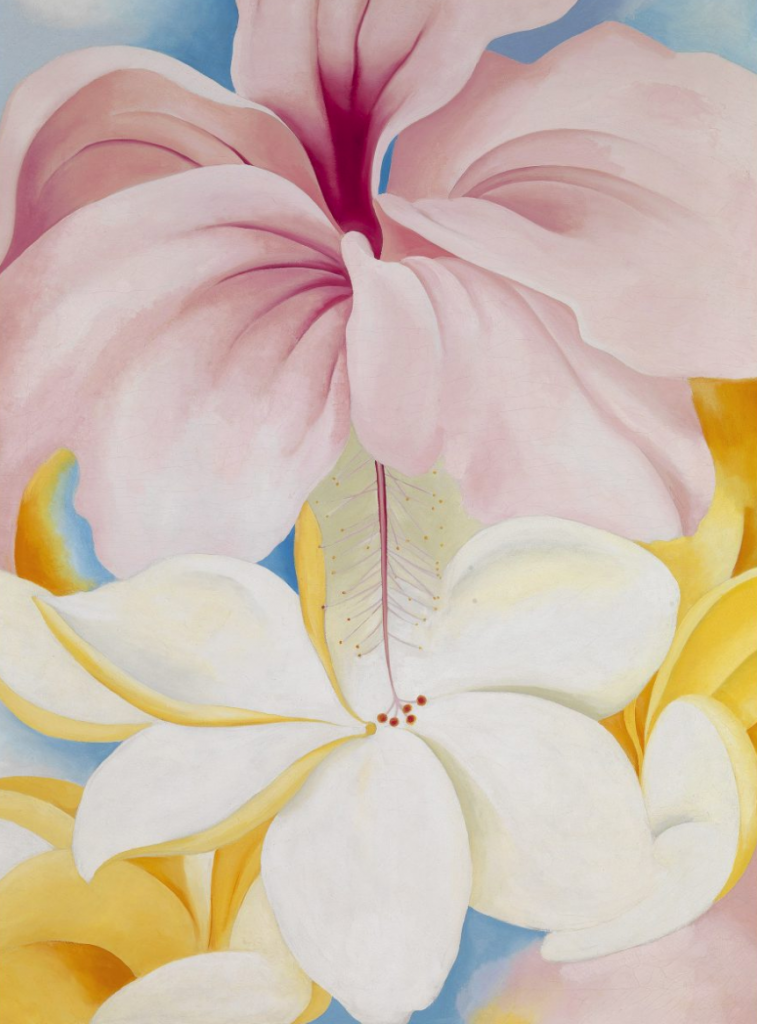 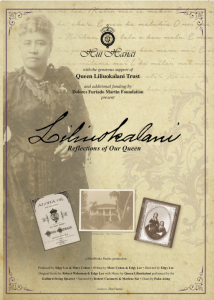 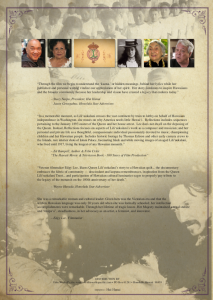 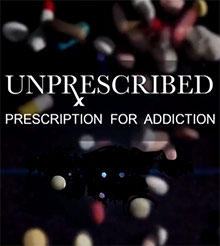 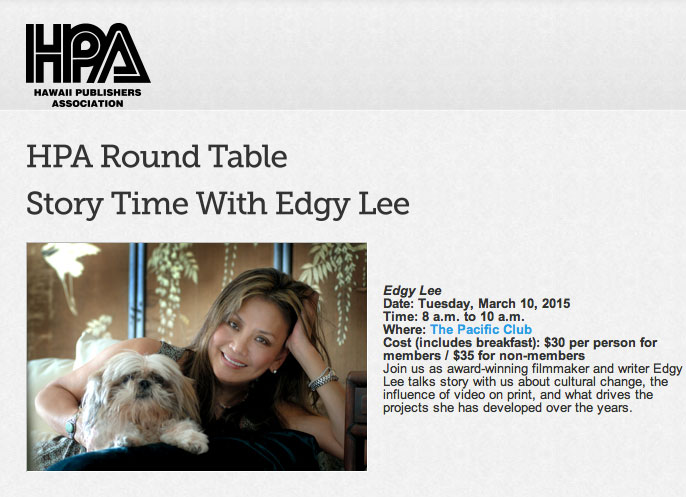 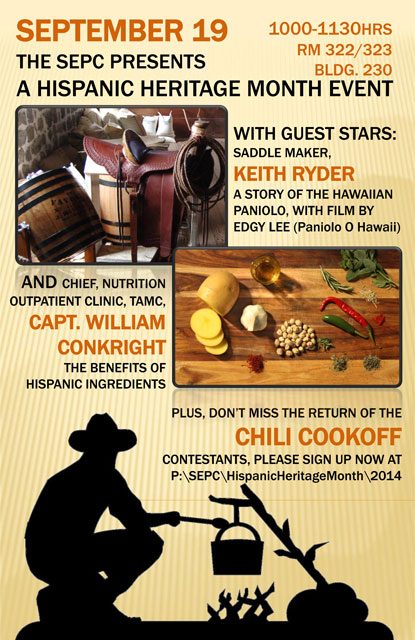 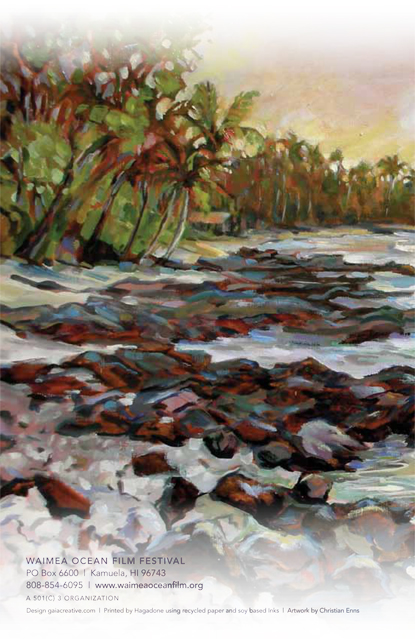 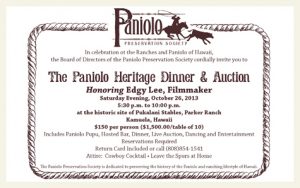 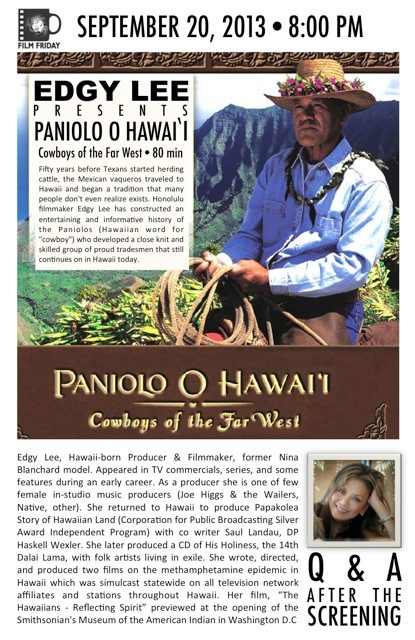 Coffee Talk, September 20 will be a night of sights & sounds from local artists Sonny Silva, Lorenzo DeStefano and Edgy Lee.
Check out the flyers, links and our Facebook page for more info.
https://www.facebook.com/pages/Film-Friday-at-Coffee-Talk/359204387529494 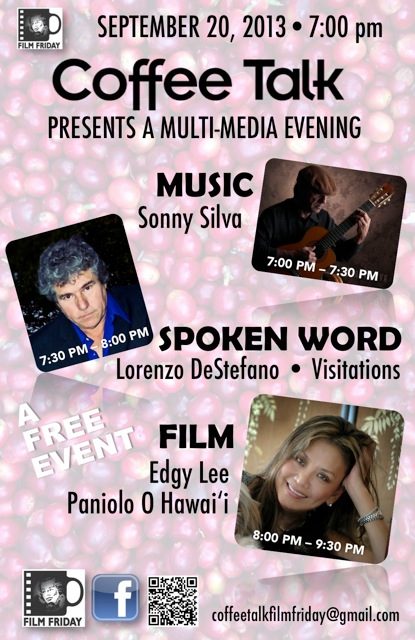 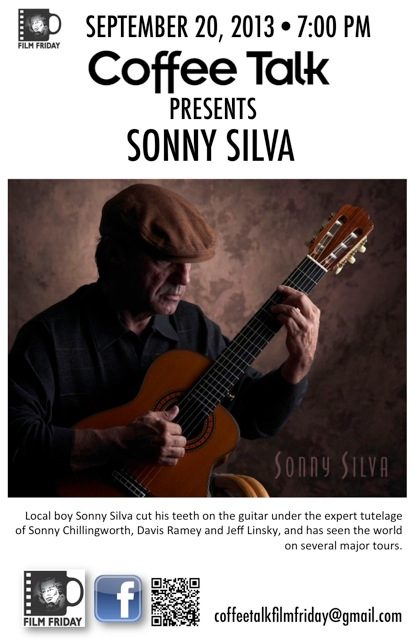 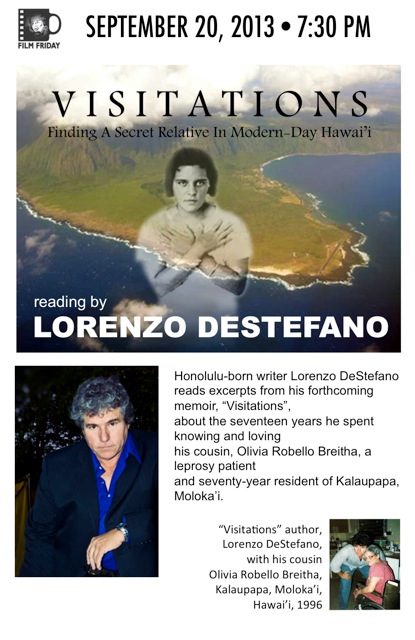 Library for the Blind
Waialae Country Club
Edgy Lee is the Keynote Speaker.
By Invitation Only from 11am – 2pm.
For information about volunteering to read for the organization call (808) 732-7767 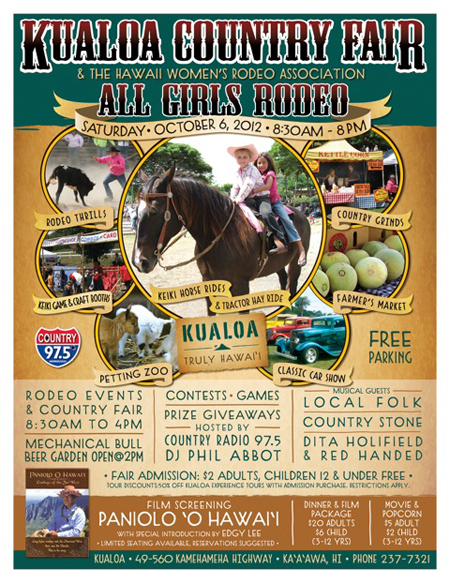 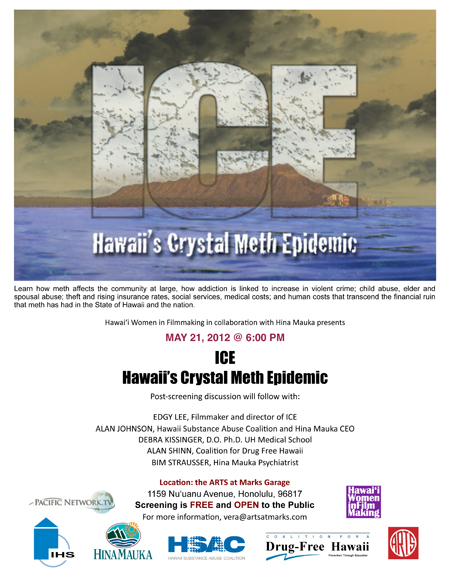 Hawaii Filmmakers Showcase Sundays:
“Panilolo O Hawaii – Cowboys of the Far West” with director Edgy Lee
Doors open at 6p – Show starts at 6:30p
Admission $10 | Kama’aina $8 | Keiki (16 and under) $5
Edgy Lee has constructed an entertaining and informative history of the paniolo’s (cowboys) who developed into a close knit and skilled group of proud tradesmen, who exist even today. 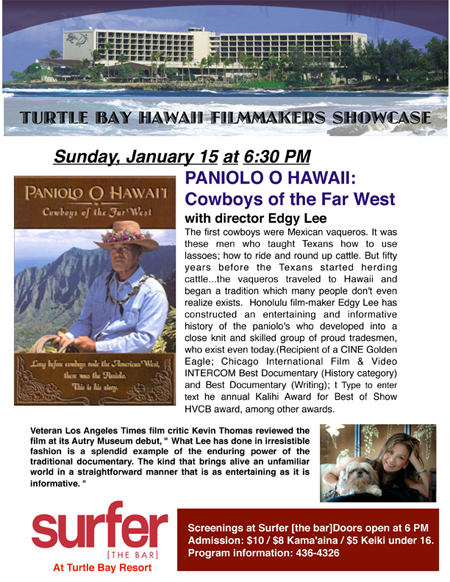 Doors open at 6p – Show starts at 6:30p
Admission $10 | Kama’aina $8 | Keiki (16 and under) $5
The Sport of Stand Up Paddle seems to have popped up out of nowhere but the truth is, the sport has deep roots in the both early Polynesian and Hawaiian history. Filmed in Hawaii, Fiji and Tahiti, this film is a must see for everyone and features premier athletes that got the sport off the ground. 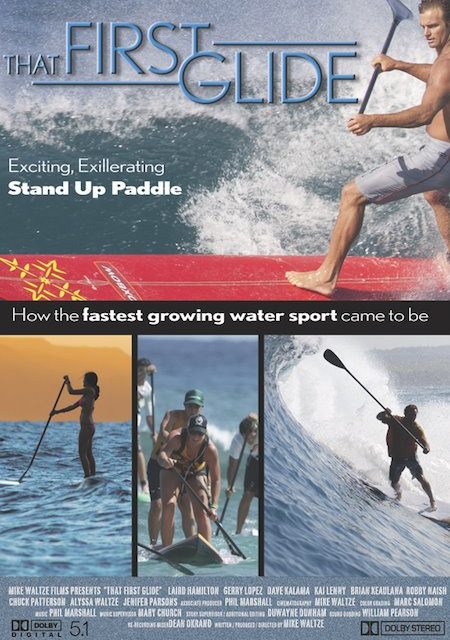 Registration for attendance prior to event. Limited to 100 guests. @TEDxHonolulu@HTDCorg it’s actually too late to register to attend LIVE, however please join TED.com online LIVE at: livestream.com/tedx2

Edgy is a featured speaker at the first TEDx Honolulu event on 11.11.11, at Cupola Theatre. TED is a nonprofit devoted to “Ideas Worth Spreading”. It started (in 1984) as a conference bringing together people from three worlds: Technology, Entertainment, Design. Since then its scope has become ever broader. Along with two annual conferences each spring, and the TEDGlobal conference in Edinburgh UK each summer — TED includes the award-winning TEDTalks video site, the Open Translation Project and TED Conversations, the inspiring TED Fellows and TEDx programs, and the annual TED Prize.

TEDx was created in the spirit of TED’s mission, “ideas worth spreading.” The program is designed to stimulate dialogue through TED-like experiences at the local level. At TEDx events, a screening of TEDTalks videos — or a combination of live presenters and TEDTalks videos — sparks deep conversation and connections. Attendance is by invitation only but you may apply for invitation to the event at http://tedxhonolulu.org/register-to-attend/
TEDxHonolulu 2011 Official Program

Keynote for Organization of Women Leaders
Pacific Club
Edgy introduces Pacific Network.tv and discusses current film, How We Learn, a feature documentary production on the fascinating history of how we educate or share our wisdom, knowledge, and family traditions.

Women in Filmmaking
Mark’s Garage
Women in Filmmaking is an artists collective based in Honolulu, Hawaii that provides mentoring, peer support, and a place for women filmmakers to do work-in-progress screenings and discussions of their work. It is a community of filmmakers sharing their experiences and expertise in a safe and creative space. This series invites a few of Hawaii’s women filmmakers to keynote in an informal q&a atmosphere.
Showing film excerpts and q&a with audience

Artist in Residence Special Presentation
Volcano National Park
Edgy will present “The Hawaiians Reflecting Spirit” in part shot on location at the park. Join us for an evening with the filmmaker.
Hotel accommodations available contact:
At the Crater’s Edge, Volcano Guest House (808) 967-7775
TOLL FREE: (866) 886-5226
Naniloa Volcanoes Resort 808. 969. 3333 or
www.hottours.us

This independent film festival showcases local documentaries and the work of filmmakers with ties to Hawai’i. Professionals such as Eddie Kamae as well as amateur filmmakers like Ke Kula Ni’ihau o Kekaha Public Charter School have shared films on saltmaking in Hanapepe. The Historic Waimea Theater is unique to Kaua’i in its day-long festival.
waimeaheritagedays@gmail.com

Advanced registration advised $35/fee $20 students. Lunch
Contact John Mason, Big Island Film Ofice 808-327-3663
On Saturday, March 27 acclaimed filmmaker Edgy Lee will lead an impressive line-up of Oahu and Big Island documentary producers for an all day workshop, “The A to Z of Documentary and Non-Fiction Video Production.” The program will take place at the University of the Nations in Kailua-Kona, with registration beginning at 8:30 am. The aim of the seminar is to cover many of the important aspects making documentaries: development, fund raising, production, editing, marketing and distribution.

Edgy Lee is one of the state’s most accomplished filmmakers with experience as a writer, producer, and director who has accumulated a long list of credits throughout her award-winning career. She will kick off the day with an overview of how to produce programs for national audiences. Her presentation will focus on development, fundraising, content, and new media. She will discuss her pioneering enterprise, the Pacific Network, an internet television network with nine channels of programming.

The challenges and protocols of “Physical Production” will be covered by Keith Nealy and Willy Navarro, head of the School of Digital Filmmaking at the University of the Nations. Both of these accomplished filmmakers are based on The Big Island. Keith has focused on producing films that take their inspiration from Hawaii’s rich cultural and historical landscape. He is currently working on a documentary, “Kindy Sproat: A Gift from the Heart,” one the island’s most beloved musicians and storytellers. Willy Navarro is a producer, director, and writer who has shot news stories and documentaries in over 30 countries. He has covered such diverse topics as street kids in Brazil and hurricane relief in Honduras.

Filmmaker Marlene Booth will cover aspects of “Editing and Post-production”, rights management, clearances, and intellectual property rights issues. Her latest documentary, “Pidgin: Voice of Hawaii,” won the audience award in documentary filmmaking at the recent Hawaii International Film Festival. Broadcast on the local PBS channel, her work has earned her a CINE Golden Eagle, an Emmy nomination, and a Bronze Apple award from the National Educational Film and Video Festival.

Oahu filmmaker Gerard Elmore and Mericia Palma will end the day with an overview of the “Marketing and Distribution” of documentaries, with a special emphasis on non-traditional methods of marketing and distribution. Gerard is the current host of “Hawaii Reel Stories” on cable channel OC 16 and his latest project, an independent feature film, “All for Melissa,” has received national distribution. Mericia Palma is the founder of a content creation and marketing company, Left of Center, that helps media artists create, produce, and market their work. She co-produced “All for Melissa,” and led the national distribution effort.

A panel discussion with all of the workshop speakers will conclude the day. This “not to be missed” seminar is targeted at media professionals looking to gain greater insight and practical knowledge about producing documentaries at a high level, and to network with others on collaborative projects. Students serious about digital media and production should also attend to upgrade their skills and meet working professionals.